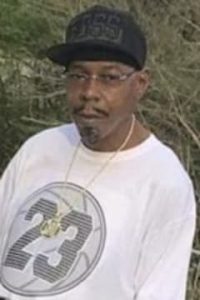 Terry Davis was born on March 27, 1969, to Ms. Nora Agee in Alexander City. At an early age he accepted Jesus Christ as his Lord and Savior and united with Mt. Sinai Baptist Church. He received his elementary and high school education from the Tallapoosa County School System and was a proud graduate of the class of 1987.

Terry was a loving person and loved his family. He was the life of the family gathering and enjoyed laughter and dancing. He had a heart of gold. Terry would help anyone he could. He was a die-hard Florida State fan.

Charles Lewis Scarbrough peacefully passed over on June 8, 2022. He was warmly greeted by his wife, Sarah Josephine Long Scarbrough; his son, Aubrey Lewis Scarbrough; his parents, Bernice and W.A. Scarbrough; his aunts and uncles who were so dear to him; as well as his sister-in-law and brother-in-law, Betty and Dick Wyskida, to whom he had a special connection as the men were roommates before meeting the sisters.

He is survived by his daughter and son-in-law, Denise and Tom Nelson; granddaughters, Elise Laurie Nelson and Celeste Sophie Nelson; as well as nieces, nephews and cousins.

Lewis grew up on the outskirts of Rockford, Alabama, surrounded by family. He was adored and treasured by his parents, as well as by his grandparents and aunts and uncles. His grandparents, Lewis and Queen Penton Shaw, and aunts and uncles, Gertha and Penton Shaw and Nettie and Clyde Shaw, all lived within hollering distance. His other beloved aunts, Julian Shaw Bass and Mozelle Shaw Herndon, were also an integral part of his life.

Lewis attended school in Rockford and graduated from Coosa County High School. He attended Marion Military Institute and graduated from Auburn University with a degree in Mechanical Engineering. He then went to work at the Army Ballistic Missile Agency in Huntsville, which would later become a part of NASA. He began working on rocket propulsion systems but was later assigned to the Lunar Landing Research Vehicle. He was most proud of this project where he did human engineering, designing the vehicle’s control stick and seat belt.

In 1962 he married Sarah Josephine Long from Newberg, Alabama. In 1963 Denise was born, and in 1964 Aubrey was born. Lewis loved to travel and took his family with him on many TDY work trips, as well as traveling for pleasure.

In 1982 Lewis retired from NASA, and they relocated to Lewis’ home place just outside of Rockford. Lewis had longed for many years to get back to Rockford and always stayed involved with the community. Where he saw a need in Coosa County he imagined a solution. He built many buildings and started many businesses alongside running the family farm. In 1992 he started and financed “The Coosa County News.” Aside from all this he was happiest outside, walking through the woods, driving through the country side, or on a piece of large equipment.

Lewis left an indelible mark on all that knew him. His mind and energy level was almost always in fifth gear. Even as he naturally declined he would rev it up, not wanting to miss an ounce of living and reminding those around him there was much to be done.

There will be a memorial to celebrate his life at 2 p.m. on Saturday, June 25, 2022, at Pleasant Hill Methodist Church.

In lieu of flowers please consider a subscription for yourself or as a gift to “The Coosa County News” or your hometown newspaper. Because Lewis Scarbrough thought it was so important for Coosa County to have a local news source and we (his family and the staff of “The CCN”) agree, we will be doing our best to make that continue to happen. Friends of “The Coosa County News” Fund is being set up to receive donations for this purpose. More information on this later.