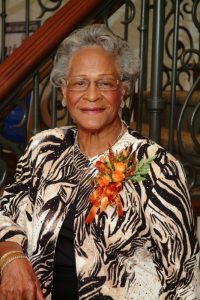 A celebration of the life and legacy of Mrs. Levelma M. Simmons was held Saturday, April 23, 2022, at New Home Missionary Baptist Church in Rockford with Pastor Christopher Todd officiating. Interment followed in the church cemetery. She passed from this life on April 18, 2022.

Levelma McKinney Simmons was born in Coosa County, Alabama, on December 27, 1933, to the parentage of Mr. and Mrs. Joseph and Mable McKinney. She graduated from the Coosa County Training School, ranking in the top ten of her class.

After completing high school, she immediately enrolled at Tuskegee Institute (University) where she received her Bachelor of Science degree in education, majoring in English with a minor in History. She furthered her study at Auburn University and Miles College in Birmingham.

Levelma married Otis Simmons in 1960 and remained married until his death in 2013. While she bore no natural children, she mothered many.

Levelma attended The New Home Missionary Baptist Church since birth. She accepted Christ and was baptized at the age of nine, and remained an active member until her earthly departure. Levelma did everything in the church but serve as an usher, deacon, and preacher! Specifically, she served in various leadership positions, the Matrons and Senior Missionary Society; she also was an active member of the music ministry, including but not limited to being a founding member of the No. 3 Choir, and later serving in the Mass Choir. Believing in the value of Christian education, Levelma was an active Sunday School attendee and served as treasurer of the Sunday School Department. Her wisdom and expertise were also utilized as a trustee including service on the Church’s Building Committee and leading the decoration/interior furnishing committee during the planning and construction of New Home’s new sanctuary completed in 2011. Levelma often served as a resident historian and church mother.

Levelma’s religious service was not regulated to New Home. She also served in various capacities in the Morning Star District Association, including stints as the Dean of Congress Education, president of the District Choir, and numerous positions in the Women’s Convention Matron’s Auxiliary.

Levelma was also civically engaged. She was an active participant in the American Legion, serving as president of the local chapter and national chaplain. She was also an active member of the Tuskegee Alumni Organization and the Retired Teachers Association. Her cumulative community service was recognized when she was inducted into the Central Alabama Coosa County Hall of Fame in 2014 and given the seniors of achievement award by the Montgomery Area Council on Aging in 2015 for her significant lifetime contributions to the community. Levelma was truly a servant.

Levelma was preceded in death by her parents; brother, Bernard; and husband, Otis. She leaves to cherish her memory: one brother, Joseph (Betty) of Kellyton, Alabama; two sisters, Annie Ruth of Farrell, Pensylvania, and her twin sister, Arthelma of Dallas, Texas; and a host of nieces and nephews.

Levelma’s life of service and sacrifice cannot be fully articulated in these brief words. She was an influential trailblazer, a powerful example, a spiritual counselor, and a cheerful giver. Oh, what a pillar of the community! Oh, what a servant for the Lord she was!