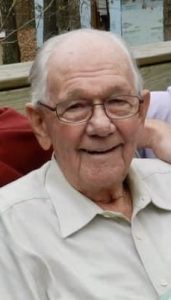 Sid Turner, AKA Papa, of Rockford, passed away on Wednesday, February 10, 2021, at Brown Nursing Home in Alexander City at the age of 96. He was a resident of Rockford, where he lived with his wife of 74 years, Geraldine Collins Turner. He was born on January 23, 1925, in Tallapoosa County to Archie Claud and Mattie Adcock Turner and was one of eleven children. He was a member and deacon at Providence Baptist Church and loved his church family very much.

At the age of 18, Mr. Turner joined the United States Army. He served his country from 1943-1946 during the World War II conflict and was sent to Saipan. When he returned from his service, he married Mrs. Geraldine Collins Turner on March 1, 1946.

Mr. Turner had a very successful career as owner/president of Turner Painting Inc., which he molded into a family business. He was an active member of the Painting & Decorating Contractors of America and received many awards for his work. At one time, he actually had a “Turner Paint” car that raced at the Birmingham International Raceway. He also opened and ran the Western Auto store in downtown Rockford.

Throughout his lifetime, Mr. Turner had many interests and hobbies. He was a Shriner and a member of the Alabama Cattlemen’s Association, but his passion for horses surpassed them all. He was very active in the Alabama Quarterhorse Association and participated frequently in shows with his award-winning stock. He loved Alabama football and was proud of the big “A” his friend Mack constructed for his birthday one year. He got a kick out of its ability to be seen from outer space.

He is preceded in death by his sons, Kenneth L. Turner Sr. (Marsha), James Alan Turner and John S. Turner; his parents; and 10 siblings.

In lieu of flowers, memorial contributions may be given to the Providence Baptist Church Cemetery Fund at 2950 Coosa County Road 459; Rockford, Alabama 35136.