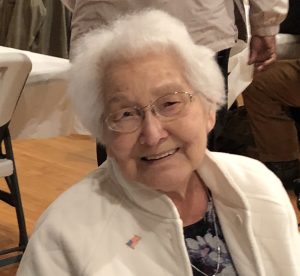 Mrs. Elizabeth H. Collins from the Richville Community of Rockford, Alabama, passed away on November 28, 2021, at the age of 94. A graveside service was held Thursday, December 2, 2021, in Providence Baptist Church Cemetery with Bro. Paul Shaw and Bro. George Gardin officiating.

She was preceded in death by her parents, Howell and Madell Hanna; aunt Margaret Jones; uncle Paul Jones; and cousin Dalton Jones.

In lieu of flowers, the family requests memorial donations be made to Providence Baptist Church Cemetery Fund.

Ms. Harris passed away on Tuesday, November 23, 2021, at Chapman Healthcare Center. She was born on March 16, 1941, in Fayette, Alabama, to Rev. Elijah Horton and Nellie Faye Ray Horton. Ms. Harris loved her family dearly. She was a retired schoolteacher with the Tallapoosa County Board of Education. Ms. Harris was a member of Ray Baptist Church where she played the piano and organ for many years. She loved to travel, was a collector, artist, and was a caretaker for whoever needed her.

She was preceded in death by her parents and her beloved dog, Buddy.

Mr. Vickers passed away on Thursday, November 25, 2021, at his residence. He was born on December 7, 1949, in Coosa County to Alfred Raymond Vickers and Aubrey Mae Brown Vickers. He was an active and dedicated member of Oak Chapel Baptist Church, where he served as treasurer, Sunday school teacher, sang in the choir, taught VBS, enjoyed visiting members of the community with Bro. Stone, and was in the Brotherhood. He was a hard worker and enjoyed working in his garden and feeding his chickens. He worked for Russell Corp. for 30 years and retired as a Cloth Inspector. He then worked at Walmart for 3 years as a cart pusher and worked in the garden center. After Walmart, Mr. Vickers worked for the Alabama Department of Transportation as a Survey Engineer for 10 years. He was a proud U.S. Army veteran of the Vietnam War. He was an avid Alabama fan, enjoyed watching westerns and riding his tractor. He had a great sense of humor and loved having a good time. His greatest joy was his family, and he loved spending time with them.

He was preceded in death by his parents and brother, Dale Vickers.

The family would like to give a special thanks to Kristin and Haley of Southern Care Hospice for the wonderful love and care that they extended to Mr. Vickers and the family.

The family will hold a private memorial service at a later date.

Radney-Smith Funeral Home in Sylacauga will direct the services.

Funeral service for Ed Windsor, 62, of Alexander City, will be Saturday, December 4, 2021, at the Chapel of Radney Funeral Home.  Rev. Mike Densmore and Rev. Chip Vann will officiate. Burial will follow in the Hissop-Concord Cemetery. The family will receive friends on Saturday, December 4, 2021, from 12:30 p.m. to 1:30 p.m. at Radney Funeral Home.

Ed passed away on Monday, November 29, 2021, at Grandview Medical Center in Birmingham. He was born on August 5, 1959, in Bossier City, Louisiana, to David Earl Windsor and Patricia Ann Prater Windsor. Ed loved his family dearly, especially his granddaughter, “Sweet Pea.” He loved his job with Alabama Power Shoreline Management, especially working on the Goat Island, Dare Park and all river projects. Ed was a member of Alexander City First United Methodist Church, was a man of strong faith and would help others in their walk of faith, also. He was an avid Auburn and SEC football fan, loved to turkey and deer hunt, enjoyed drawing cartoons for his family, woodworking, and building.

He was preceded in death by his father, David Earl Windsor; and brother, Kenneth Albert Windsor.

“Work like you’re working for the Lord!” – Ed Windsor

In lieu of flowers, memorials may be made to:  Hissop-Concord Cemetery; c/o of Diane Hough; 216 Lorena Dr.; Alexander City, Alabama 35010.