Mrs. Forbus passed away on Thursday, November 18, 2021. She was born on May 4, 1926, in Elmore County to William Oliver Fomby and Lucy Jane Brown Fomby. She loved her family dearly, especially her grandchildren. Mrs. Forbus retired from Russell Corp after over 30 years of service. She was a member of Ray Baptist Church. Mrs. Forbus enjoyed vegetable gardening, canning, flowers, cooking for her family, Alabama football, taking car rides, and getting outside. She was known for her delicious pound cakes, chicken and dressing, and chocolate gravy. 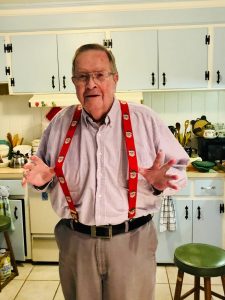 Mr. Humphrey passed away on Tuesday, November 23, 2021, at Russell Medical. He was born on January 16, 1938, in Goodwater to Jesse Penton Humphrey and Mable Adair Humphrey. He graduated from Goodwater High School in 1956 before attending Jacksonville State University where he received his bachelor’s degree in business in 1961. He served in the Army National Guard during the Berlin Crisis. He was an active member of Alexander City Methodist Church. He enjoyed volunteering his time at Russell Medical Center, Red Cross, and the Retired Senior Volunteer Program (RSVP). Mr. Humphrey was a hard working business man who instilled the value of good work ethic to his children, working many years at Belk-Hudson, then at Russell Corp. He was a great storyteller who was always the life of the party. He enjoyed cooking and watching beloved sports teams, Jacksonville State University, The University of Alabama and the Atlanta Braves.

He was preceded in death by his parents and sister, Julianne “Judy” Phillips.

Ms. Partika passed away on Thursday, November 18, 2021, at her residence. She was born on March 7, 1946, in Coosa County to Dennis Earl Cannon and Evelyn Louise Mason Cannon. She was a loving mother, grandmother and great-grandmother.

She is survived by her daughters, Kim Jordan (Lynn) of Goodwater and Mandy Humphreys (John) of Opelika; grandchildren, Kaci McEwen (Nathan) of Chelsea, Baylee Ezekiel (Jeremy) of Weogufka, Aidan Wingo, Brianna Wingo, and Piper Partika, all of Opelika; great-grandchild, Logan McEwen of Chelsea; and sister, Marie Cardwell (Terry) of Childersburg.

She was preceded in death by her parents; daughter, Misty Partika; and brothers, Earl Cannon and Kirby Cannon.

The family requests no flowers; instead, memorial donations may be made to St. Jude Children’s Research Hospital at www.stjude.org/donate.

A Randolph County native, Mr. Staples was born on February 21, 1937, the son of the late Roy and Hattie Meadows Staples. He was a member of Pleasant Grove Baptist Church in Wadley and worked at Handley Mills and J. V. Perry’s Service Station as a mechanic.

Mr. Jack Walker, 72, of Kellyton, passed away on Monday, November 22, 2021, at Jackson Hospital. He was born on July 28, 1949, in Alexander City to Thomas Frederick Walker and Bertha Ann Etheredge Walker. He was the owner/operator of Jack Walker Machine & Welding.

He was preceded in death by his parents; sister, Anita Hussey; brothers, Andy Walker and Fred Walker.

The family will hold a Celebration of Life service at a later date in Jack’s beloved Kellyton, Alabama.