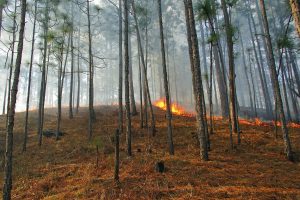 A prescribed fire moves through a pine plantation to eliminate excess fuel in the understory. Photo submitted

Social media has been filled with smoke and fire lately as many land managers, like the Alabama Department of Conservation and Natural Resources (ADCNR), conduct controlled burns to enhance the flora and fauna throughout the state.

Steven Mitchell, the ADCNR’s Wildlife and Freshwater Fisheries (WFF) Division Upland Bird Coordinator, said the Department, along with other land managers, often takes advantage of the downtime and prime weather conditions between the end of the white-tailed deer season and the opening of turkey season to conduct controlled (prescribed) burns throughout the state.

Mitchell said the WFF’s wildlife management areas (WMAs) are given a great deal of flexibility in their burn programs.

“For those WMAs that have the ability to apply prescribed fire, our staff has an established burn regime and is actively applying fire to the landscape for managing habitats,” Mitchell said. “When the weather conditions fit the burn prescription, our biologists and wildlife technicians work to conduct the fires within those parameters for a safe and effective burn. Our cooperative partners, the U.S. Forest Service and U.S. Fish and Wildlife Service, work diligently as well on the National Forests and National Wildlife Refuges, respectively, to plan, implement and manage the prescribed burning efforts on those lands, some of which host WMAs. While we would like to only burn in the non-hunting months to not hamper hunters, limited weather conditions often require our staff, as well as other land managers, to take advantage of optimal conditions to burn when conditions are available. We do our best to communicate these efforts with our hunters and advertise on www.outdooralabama.com and our Facebook page when we’re conducting controlled burns.”

Mitchell said burns are conducted mainly during the time when plants are dormant, but, to achieve certain habitat objectives, many of our burns occur when plants are actively growing, termed a growing-season burn.

“Dormant season, winter and early spring, is when most of our burning occurs, but, at times where control of woody plants is desired, a growing-season fire is utilized as you get a different effect than in the dormant season,” he said. “You get a lot more control of woody vegetation with a growing-season fire, and it has the effect of opening the structure of the stand to more light and more beneficial growth of early successional plants.

“Burns can be conducted during the dormant season or growing season accordingly and, when used in proper scale and frequency, can attain a wide collection of land management objectives. Another added benefit of controlled burning is the reduction of fire hazards and fuel loads, lowering the chance of wildfires.”

Land managers who are burning for quail have additional factors to consider.

“If you’re focusing on quail management, distribution of burn units is even more important as they have a smaller home range,” Mitchell said. “Burning, while practically mandatory for bobwhite management, also removes cover and exposes the quail to avian predation. The primary raptor migration extends through March in many areas and can impact quail significantly if considerations for sufficient cover aren’t addressed.”

Mitchell said those burning in longleaf pine habitat need to have certain considerations of the new growth on the trees.

“You want to burn longleafs before they candle out and start putting on new growth,” he said. “The buds, sometimes termed candles, are more susceptible to fire damage during this candling period. Although the longleaf is a very fire-tolerant tree, it can be damaged during this time. After a year of growth, longleafs can typically tolerate properly applied fire. However, if specific burn parameters aren’t present to burn, significant damage can occur to the saplings, so these burns need to be conducted carefully.

“But it’s critical to get a fire in longleaf stands to suppress the competition from vegetation and other trees, including loblolly pine, especially if you’re managing for wildlife. You want to maintain that open understory. There’s not much better habitat than that provided by young longleaf stands for bobwhite quail. You can have nesting and brooding habitat in the same patch of trees.”

Mitchell said just about all wildlife benefit from controlled burns in one way or another, even including deer.

“Most people don’t think about deer benefitting from burns, but they do,” he said. “Of course, turkeys and quail benefit, as well as most game birds.

“Burning is the most economical and effective way to manage early successional habitat. After a burn, a lot of the plants that come back are the forbs and legumes and grasses, which are beneficial for most of our wildlife. There’s a lot of protein in native plants that grow back after a prescribed fire.”

Mitchell said studies have shown that turkeys and quail prefer areas with a burn management program, from freshly burned to areas that have burned within 3 years. After 3 years without a burn, the habitat becomes less preferred by turkeys and quail.

“If the area has a fire history that has been established and maintained, most of the turkey nests will not be in the areas that haven’t been burned within the past three years,” he said. “The nests are going to be in cover that was burned last year or the year before. The plant structure in those units that have been burned is their preferred habitat.

“You may have seen it with turkeys; the smoke hasn’t even cleared and they’re already out there scratching around.”

Mitchell said when areas that have burned get rainfall, the new growth could be popping up within a couple of weeks, and within a month enough cover is available to hide the animals. He said most wildlife habitat is on a one- to three-year burn rotation with the shorter frequency yielding more forbs and grass and less of a woody component and vertical structure. He said burn frequency is site specific.

“On poor soils, you might need to wait three years between burns,” he said. “In rich, heavy soils, ground cover may get too dense too quickly. You may need to tighten that interval or stay on that two-year burn cycle.

“When conducted properly, burning improves plant species composition and structure for ground-nesting birds. It reduces that litter layer. It increases the bare-ground component for wildlife movement and foraging. It promotes a lot of flowering and seed production, which increases insect abundance. For your young quail chicks and turkey poults, insects are crucial for their survival in the first couple of weeks to a month after they hatch out.”

Another aspect of fires that Mitchell said is often overlooked is that the activity may reduce nest predation.

“On upland areas with a good fire rotation, you’re going to reduce the woody or hardwood component and dense vegetation conditions that the predators like to hunt and keep them in hardwood bottom,” he said. “It reduces time the predators are in upland areas where turkeys and quail are nesting.”

Mitchell said the scale of the area to be burned is also important, with 50 acres considered about the ideal size. If the fire is too large, the turkeys and quail will use the area less.

Mitchell said land managers must give a lot of consideration to neighbors, roadways and whether the land has proper fire breaks and other safety aspects before trying to conduct a controlled burn. Humidity also plays a big factor on whether to burn. If the humidity falls below 30 percent, Mitchell said burning can become a little more dangerous. Many other parameters are also considered to safely and effectively conduct a controlled burn, and it is crucial to have the proper training.

“You need to know what you’re doing,” he said. “There are classes you can take. The Alabama Forestry Commission offers a four-day course for burn manager certification where people get a higher level of fire education and become much more comfortable with applying fire to their property.”

Mitchell considers a proper burn regime one of the most beneficial practices wildlife managers can utilize.

“For wildlife management, prescribed fire is the most effective and cost-efficient tool in the toolbox,” he said. 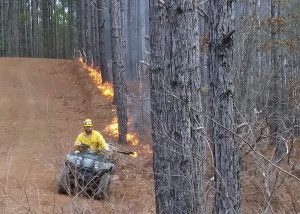 A drip torch is used to set a fire line on a section of land scheduled for a controlled burn. Photo submitted 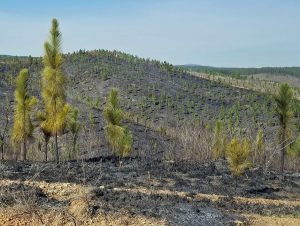 The aftermath of a controlled burn in a young longleaf pine plantation shows the benefit of prescribed fire. Photo submitted

This week 30 years ago in CCN history