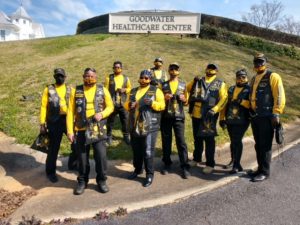 Buffalo Soldiers serving the community
Special to the News

NABSTMC was founded by Kenneth (Dream Maker) Thomas in 1993. The club has grown to more than 100 chapters with a chapter in Hawaii and South Korea.

Their goal is to serve their community, educate the world about the 9th and 10th Cavalry and ride their iron horses, or motorcycles.

March 13 was established as the National Day of Service where all chapters of the NABSTMC participated in completing a project in their community.

Central Alabama Buffalo Soldiers have also assisted with distributing food items at the food drives in Goodwater and Alexander City in the months of February and March.